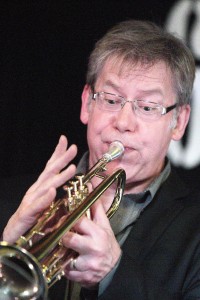 Sid is a formidable trumpet player with a AAA resumé who joined the Funkestra many funky moons ago.

He brings his rock solid lead playing and exciting soloing to the band as well as his horn arranging and even co-wrote some of the Funkestra tunes. Live he also significantly embellishes the groove with his excellent percussion playing. Generally he is a rock of a man that we all can rely on to nail the music with excellence, groove and flair.

The tall Scotsman has been the trumpet player in Incognito for the past 11 years and has also has played and recorded with other Jazz Funks artists like Brand New Heavies, Corduroy, Begger and Co, Light of The World, Snowboy and the Latin Section, Shakatak, Craig Charles Fantasy Funk Band and Mega Pop & Rock artists like Ray Charles, Buddy Guy, Blur, Stranglers, Cure, George Michael, Tom Jones, Stereophonic to name a few.